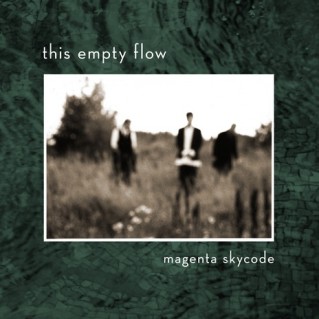 This Empty Flow was formed in 1994 by Jori Sjöroos (voice, guitar, programming) and Niko Skorpio Sirkiä (keyboards, lyrics) in Turku, Finland. They shared history in the seminal funeral-doom metal band Thergothon. Later in the year they were joined by Aku-Tuomas Mattila (bass), the leader of then rising local goth-electro band Sad Parade. The first This Empty Flow demos were recorded without a computer, i.e. Jori played drums live with the keyboard directly to the tape running in a Fostex 4-tracker.

Between September and November This Empty Flow spent 12 days in studio U96 in Pori, Finland and recorded the debut album Magenta Skycode. Magenta Skycode was recorded and mixed by Jukka Sillanpää (known from Lavra, F, As Divine Grace etc.) who also co-produced the album with the group. The album was recorded from Nowafter to Sweet Bloom of Night Time Flowers in the order which was already decided to be the final running order. Demo version of the album was recorded in summer and the demo included a song called Angels’ Playground which was changed to Snowblind about a week before the group went to the studio.

The album was released in March 1996 on Avantgarde Music. During the autumn This Empty Flow started to record the follower for Magenta Skycode. Four songs were finished but Avantgarde Music showed lack of interest so the sessions were never finished.

In November This Empty Flow made their gig debut in Lahti, Finland. The line-up was strenghtened by guitarist Jukka Sillanpää, the producer of Magenta Skycode.

Towards the end of the year Niko grew increasingly dissatisfied with the direction the band’s music and inner chemistry was going, and finally in December he left the band to concentrate on his own music in other projects.