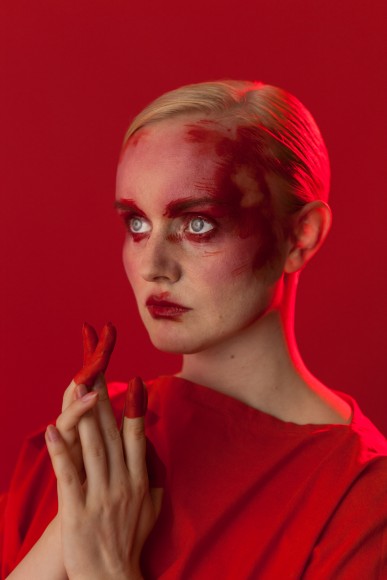 The Hearing is the solo alias of Helsinki-based musician Ringa Manner. A daydreamer, romantic, nerd, rocker and music enthusiast, you name it! She has done many collaborations with the Finnish artists like Paperi-T, Cityman, ROOXX, Ros Red and she has two own bands Ruusut and Pintandwefall.

She has been Nordic Music Prize 2017 nominee and Teosto award 2017 nominee with her second album ‘Adrian’. Since it’s creation in 2012 The Hearing has released two albums ‘Dorian’ (Gaea Records, 2013) and ‘Adrian’ (Solina Records, 2016), as well as played ca. 260 live shows in 16 different countries. On her third album ‘Demian’, The Hearing takes a turn for a more polished sound. Taking elements from modern scandinavian pop, techno and the Helsinki club scene, while letting distorted tidalwaves of howling synthesizers and choir harmonies battle it out amongst themselves, she creates a musical combination that is not easily labeled as any one genre. What started out in 2012 as mere looper pedal experimenting, has evolved into a world of it’s own.