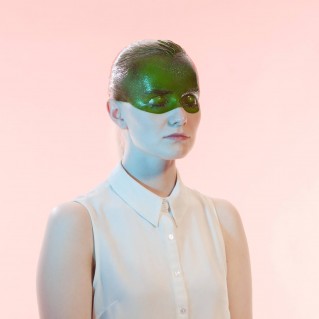 When one’s eyes are closed and the focus is on only one of the senses, it’s like arriving at the station of Something Great and the experience is much more powerful. You start to feel the warm vocal harmonies, arbitrary pop melodies, moving rhythms and a strong presence.

In her live act the artist lets you feel the warm vocal harmonies, arbitrary pop melodies, moving rhythms and a strong presence by combining all these skillful traits with looping technique. A poet and a rocker, she fuses her love for Owen Pallett, Kate Bush, Tune-Yards and Freddie Mercury all into a minimalistic monumental one-woman show.

The Hearing has done some 150 shows around the world in it’s nearly 4 years of existence. These shows include such small and uncompromising art music festivals as Kuudes Aisti in Helsinki, Finland; United Islands festival in the middle of Vltava river in Prague, and Sejerø Festival on the idyllic Danish Sejerø island; as well as bigger events, like Strawberry Festival in Shanghai, or warming up for bigger international names like 30 Seconds To Mars.

The Hearing’s debut album, Dorian, was released in Finland in the fall of 2013.