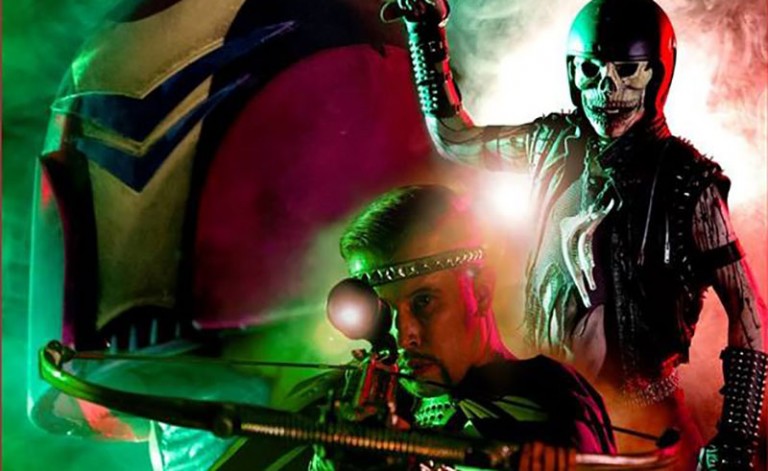 Nightsatan caught the ear of the attentive laser metal enthusiast with their debut album Midnight Laser Warrior in 2010, and now the trio debut as movie stars in Nightsatan And The Loops Of Doom. The movie draws inspiration from the very same source the band does: 80s post-apocalyptic science fiction.

The synth trio Nightsatan hail from the doomy city of Turku, Finland, and they place themselves in the post-apocalyptic laser metal genre. In the beginning the synth wizard Wolf Rami envisioned the band’s music as “the soundtrack to Miami Vice meets heavy metal”. During their career the band’s sound has extended to both ends of that spectrum, and the synth-metal riffs of the early material have given way for a more progressive and atmospheric analogue synth approach with a hint of italo disco/Giorgio Moroder feel.

Given the international cult fame gained with the already quite cinematic debut album – with kudos given by the likes of Monocle, Empire and Popvoyage – and live shows in their native Finland and Sweden, it is fitting that the trio’s next step is a movie soundtrack. Directed by Chrzu, better known as the director of animated features such as Curse of the Remote Island (2008), Nightsatan and the Loops of Doom is a proud tribute to vintage Italian post-apocalyptic sci-fi. It is a very unusual short epic, full of sex, violence and general sense of wonder.

The soundtrack album is a considerably more epic and measured affair than its predecessor. Recorded and produced by the band’s 2nd keyboard guru Mazathoth, the album features full-lenght versions of all tracks from the movie. Contrary to the synth-y debut, Loops of Doom has several guest musicians and even string instruments. The retail package contains both the soundtrack and the movie, loaded with juicy bonus features.