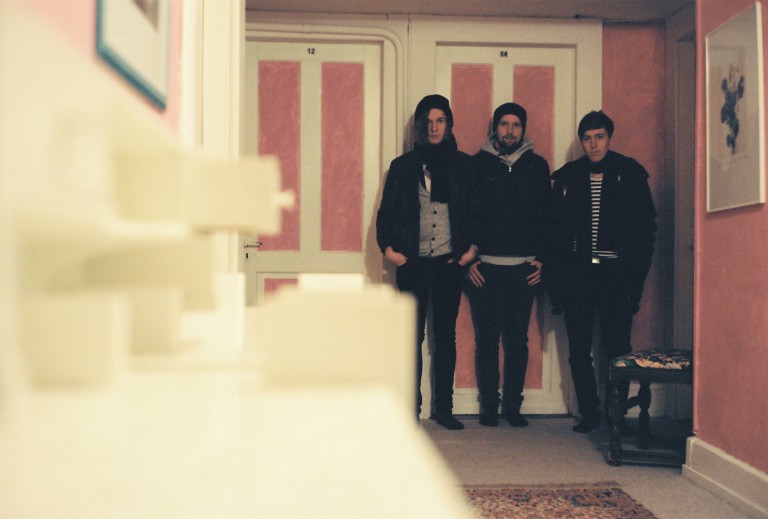 Stylistically, the music of Sans Parade is characterised by strong vocals, highly orchestral, lush instrumentation and swooning pop hooks; violins, cellos, brass section and more exotic acoustic instruments seamlessly mixed together with traditional analog synthesizers. The singer Markus Perttula gives a soulful performance full of intuitive swells and fades, making his voice a purely sonic instrument. The strength of this set is founded on the clarity of a musical vision conducted by Jani Lehto and Pekka Tuppurainen that transcends styles to create something utterly enthralling.

The first steps of Sans Parade were taken in July 2009, when the singer-songwriter Markus Perttula played his acoustic guitar in a sunny yard in Turku. He was performing as a warm-up act for the Finnish artist Eleanoora Rosenholm. One of the people in the audience was Jani Lehto, who had been looking for a singer for his new project that aimed to capture and mix the delicacies of orchestral chamber pop and the extrovert confidence of indie rock. After the show, these two musicians met and immediately found mutual ambitions and ideals in music. Markus even had a name ready for the new band and in the following week they had their first songs recorded. This is how Sans Parade came to be – suddenly and without a warning.

The discography of Jani Lehto began to form in the end of the 1990s, when a vast and restless field of electronic music flourished in his hometown Turku. In those times, Jani’s musical starting point was in the happy and collective atmosphere of house music parties. However, the first decade of the new millennium, and his participation in a disco house duo Star You Star Me and later in a darker electro pop band Déclassé, took Jani further away from these carefree times and from deep and subtle sequencer patterns. The final step in his personal development is now Sans Parade. The optimistic one-liner vocal loops of his house period have transformed into nuanced stories and synthesizers have been traded for acoustic instruments, in which every small crack in the wood and the pressure of the player’s fingers create their unique sound.

Everything is based on the text and the text is based on a story – real events that I happened to witness. None of the artistic decisions are based on witty resourcefulness, but on rejecting and accepting the musical solutions that actually tell something about the reality the song conveys.

Markus Perttula was born into a family of musicians. His blue-walled home in Southern Ostrobothnia was filled with instruments: a grand piano, a spinet, a small church organ, violins, a trumpet, etc. At the age of nine, Markus started classical music training with double bass as his main instrument. A career in music took a swift turn, when Markus moved to Turku, to study English instead. Also, the double bass couldn’t fit into his dorm room, so an old nylon string Landola guitar borrowed from home made its way to Markus’ life. A decade of classical training had ended but a decade of life as self-taught singer-songwriter had began. This led to a creative burst in songwriting alongside extensive performances with different rock bands and folk ensembles.

Having played Sergei Rachmaninov’s Vocalise as the double bass soloist in front of a full orchestra in his adolescence, it felt like a natural step for Markus to now be the singer in a group like Sans Parade, in which musicality of the pieces are highly developed to express the innermost feelings and meanings behind the lyrically romantic and existential matters.

The third driving force of Sans Parade is Pekka Tuppurainen. Pekka, now residing in Stockholm, has a different musical background from Markus and Jani with his involvement in jazz and improvisational music scenes. Pekka’s previous work, extremely experimental jazz-based art music published by Ilma Records, received recognition and high praises among the professional circles. In Sans Parade sessions, Pekka has given an irreplaceable input to group dynamics, sometimes even leading to heated debates about the music’s direction and musical actions. The long struggle also took its toll, when Pekka left the band for a short while just to return with more enthusiasm and motivation than before. Perhaps this struggle also worked as a binding force towards the completion of the creative process. It surely lifted Sans Parade above the average indie pop to a more inspiring level, maintaining the immense beauty and accessibility of the band’s music.