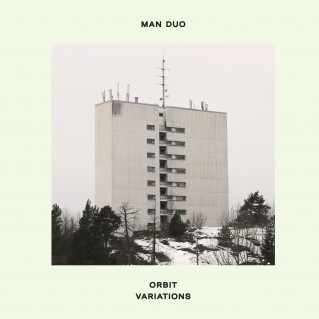 Man Duo – the pairing of Finnish producers Jaakko Eino Kalevi and Long-Sam – follow their acclaimed album Orbit with a new EP of remixes and interpretations. For Orbit Variations, Jaakko and Sami invited like-minded artists to rework tracks from the album.

Lung Dart, cult composers behind the avant-pop classic As I Lay Drying album (PRAH), give What If It Falls a glossy deep-tissue massage with their Hydration Treatment remix. Last year Man Duo remixed Lung Dart’s Totem for their 12 Edits compilation and here they return the favour. This track is accompanied by a beautiful video directed by Karolina Paczkowska which was shot during a midsummer party in the Swedish countryside.

Reckonwrong, the unorthodox star of the Whities label, caresses The Middle into a gentle psychedelic lullaby, using Sean Nicholas Savage’s vocal as a stepping stone to bliss.

For their searing remix of Vanessa, Gothenburg electro heavyweights Luke Eargoggle (Bunker, Stilleben) and Kan3da take the track to the dancefloor in a firm but friendly manner. This slinky mix has been a secret weapon in Eargoggle’s sets all year.

Tottenham disco titan Ali Renault reworks What if It Falls into a muscular late-night prowler – available for the first time on streaming platforms.

On her version of Vanessa, the English singer and guitarist Vanessa Anne Redd offers a stripped-back companion piece to the Man Duo original. Every home should have a copy of her debut solo album Behind the Wall, out on the Sharp Attack label.

The title of the new Man Duo song Alkuräjähdys means big bang in Finnish and this live studio recording finds the pair meditating on the nature of things, appropriately enough, while synthesisers build and a pastoral melody attempts to defuse the tension.